The city was surrounded by a wide moat… 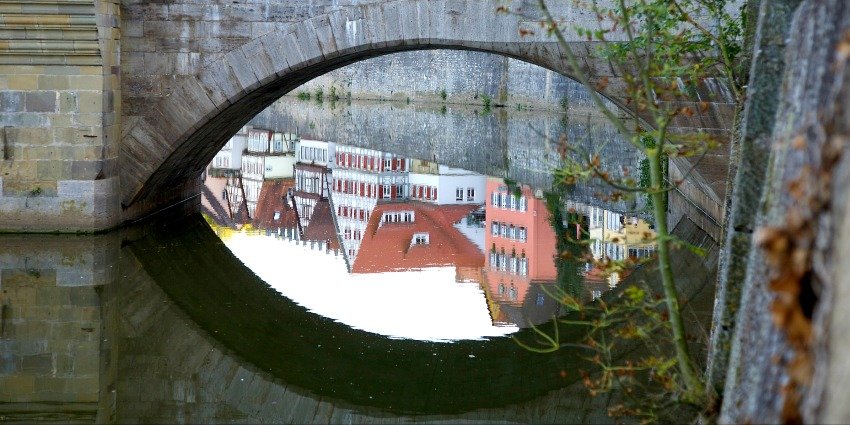 Schwabisch Hall in Germany, the city that owes its wealth to ‘white gold,’ is made famous today by the Goethe Institute, which attracts students from all over the world. They come here to study German, and the courses offered are from basic to higher levels. But students are by no means confined exclusively to classrooms. The city is steeped in history. The old part of town provides spectacular sights, taking you back to medieval times when this was a walled city with 55 lookout towers. It was surrounded by a wide moat as protection against neighboring landlords.

During the summer months there is an influx of tourists from other German cities and surrounding countries. The Market Place is agog with activities. St. Michael’s Church overlooking this place, looms into the skies and its imposing façade, the filigrane stone pyramid, can be seen for miles around. Inside the church there are works of art like the Dutch Altar and the crucifix. There is an underground ossuary with thousands of dead men’s bones. 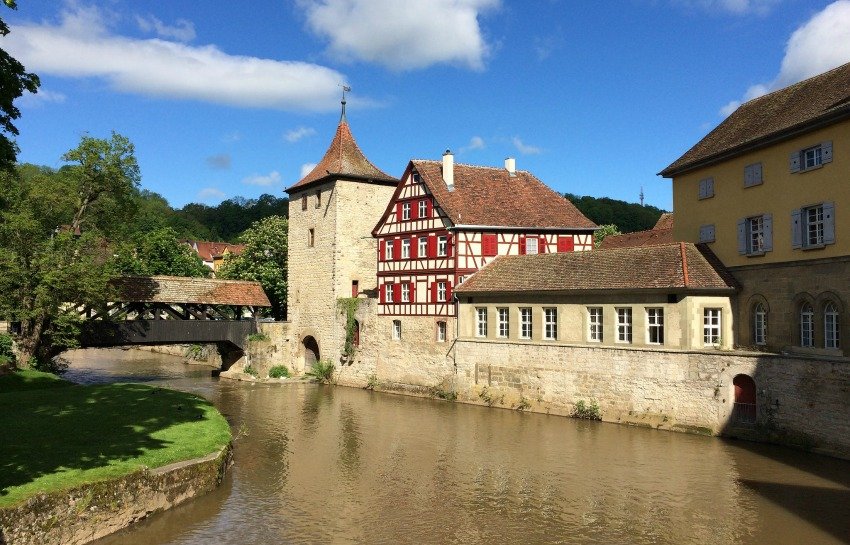 Leading up to the church is the Freilicht Spiele – fifty four majestic steps that have been used as an open air theatre since 1925. The performances are classical, musical or contemporary. Plays are staged between June and August, and the market place is jam packed with people, right down to the Town hall opposite, which looks like a Baroque palace. This market complex is considered one of the most beautiful places in South Germany.

Across the Kocher River is a wooden bridge that leads to the Globe Theatre. It is modeled on the famous Shakespeare Globe Theatre in London. Here, the performances are between May and August. It has a capacity of 550 seats and the acoustics are simply marvelous.

Schwabisch hall in the middle ages, grew rich with the mining of salt. It was called ‘white gold.’ Wagons of salt would be sent to markets far away in Speyer, Frankfurt and Alsace. On their return, they would be laden with barrels of wine and beer to be sold in the markets of Bavaria. The rich noblemen and salt merchants lived in palatial houses, seven stories high and were decorated with their individual coat of arms on the doors. Underneath were cellars 3-4 stories deep. Some of these houses are well preserved in the “Gentlemen’s Alley” of Oberherringasse and Unterherringasse.

Society was distinctly stratified. The rich lived up on the hillside, the middle class at a lower level, and the labourers, outside the city. The area where the middle class lived was always soggy because of the salt pans. Archaeologists have shown that salt was mined by the Celts even as early as the 4th century.

Schwabisch hall abounds in history and culture. There is a conglomerate of seven historical buildings with a combined floor space of 3000square metres, and is the largest museum in the state of Baden Wurtemberg. It includes the Keckenberg Town House (owned by a Noble family from 1395-1545), and the Stadtmouhle. The museum offers a thematically planned tour through the artistic and cultural history of the city from Stone to Middle Ages. The upper floors exhibit portraits of Royalty, the rich Burghers, their costumes, coat of arms, furniture and many wooden sculptures by famous artists.

The Stadtmouhle (old mill) next door, houses the history of the Jewish people in Schwabisch Hall during the 19th-20th century, until the French revolution. Jews were not openly welcomed in those days. They were not allowed to take up any occupation. So many became money lenders. Their synagogues were in attics. In Stadtmouhle, you see a richly decorated wooden panel from a synagogue of 1738. There are other interesting artifacts too. 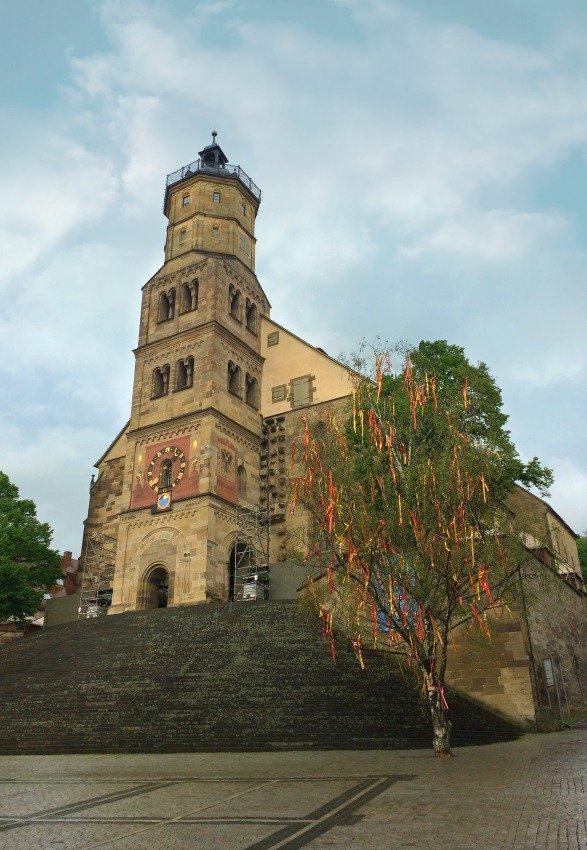 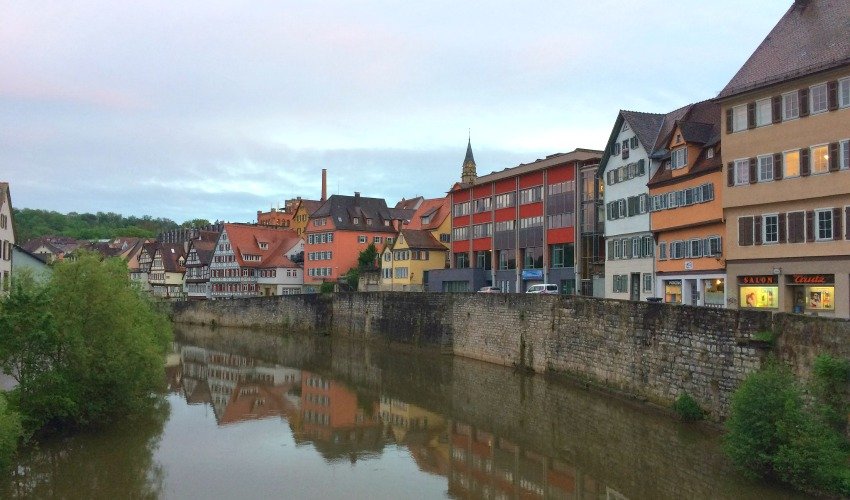 Another museum worth visiting is the Johanitahalle, an old church converted into a museum. After the Napoleonic War, the Holy Orders were closed. So the altar paintings and sculptures belonging to the 15th and 16th centuries were brought here. They are still well preserved because of good temperature control and sanitary facilities based on high museum standards.

You cannot come away without visiting the Kunthsalle Wurz. This museum consists of two glass fronted wings through which sunlight streams in. One section displays contemporary art of the 20th and 21st centuries. The other wing is used for discourses on Art related subjects and has an expensive cafeteria too. From here, one has a beautiful view of the old town.

The Haal Brunner (salt fountain) is on the right bank of the Kocher River. It was the source of the town’s wealth, right up till the 19th century. It was a 13 metre-deep fountain of brine which was siphoned off and boiled in Haal houses in the surrounding area. There were salt simmerers to watch over the boiling salt pans. After the Napoleonic War, the State of Baden Wurtemberg took over the salt well from the simmerers in 1804. The well has been permanently closed since 1957. But a new hole was made ten metres away. The brine from here now supplies the Solebad Spa which is in the Hohenlohe Hotel. The State gave the salt simmerer families a ‘pension forever.’ Even today the descendants claim that pension which is as little as 1.5 euros. But it happens to be a prestige issue.

These descendants observe a Cake and Fountain Festival every year during Whitsunday, to celebrate the Golden Age of Schwabisch hall. It is a nostalgic yearning for the prosperous days of ‘white gold.’

Schwabisch hall can be reached by train or road from Nuremberg or Stuttgart.

Photo Attribution: photos are curated from Flickr with a creative commons license: 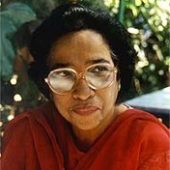 Eva Bell is a Fellow of the Royal College of Obstetricians & Gynaecologists. She is a freelance writer whose articles, short stories and children’s stories have been published in magazines, newspapers, online and in several anthologies. She is the author of : Novels – “Silver Amulet,” “When Shadows Flee,” “Halo of Deceit,” “Runaway Widow” “Power Surge in Eden.” “Knee Jerks and Gallop Rhythms.” Non-Fiction- “Grace Abounding,” “Womanism- The Adventure of being a Woman.” Children’s Books: “Lost on the beach,” “Sniffer Dog and other stories.” “Wandering into Wonderland.” E-books: Cactus Hill, Survival Strategies in an Angry World, Storm in the Desert, Womanism and Runaway Widow, Back From Beyond (Amazon Kindle.) The Singing Gondolier(Amazon Kindle) Website: www.evabell.net Blog: http://muddyloafers.blogspot.com