5 Epic Things to Do at Padre Island National Seashore

The Laguna Madre is a top windsurfing site, only three feet deep, and one of the saltiest bodies of water on earth.

photo gallery
There is more to Texas than cattle and oil fields. Although, in the early days, two-thirds of South Padre Island was a cattle ranch. So, there you go…Texas!

It’s a big state. Said to be 248 times the size of Rhode Island and double the size of California. From north to south is 801 miles and east to west is 773 miles at the extreme points. Within those borders is a diverse land. Today, the cattle are gone from South Padre Island, but the barrier island is open to travelers and nature lovers, who are often the same.

Padre Island National Seashore is 70 miles of protected coastline that is part-time or full-time home to over 380 species of birds, a safe haven for five types of sea turtles, home to alligators and dolphins, and so much more. Nature lovers will find a diverse ecosystem along the South Texas coast filled with cotton-candy-colored spoonbills, baby turtles shuffling in the sand, and plenty of humans safely playing near them on the sand and in the water.

South Padres Island weather is pleasant all year, with the hotter and more humid summer daytime temperatures from June to September reaching 90+ degrees Fahrenheit during the day. Winter temperatures are in the 60s-70s, with lows in the 50s overnight, which will feel like heaven if you are used to snowy winters, but many will want to bring jackets and pants!

There are many things to do if you love the beach and outdoor recreation. Anything in and around the water is possible, from kayaking and paddling to fishing and diving. On the beach, you can experience a turtle hatchling release, ride your bike or drive your 4WD on the sand in some areas, search for shells or enjoy a day at the beach, unplugged.

Here are five things to do at South Padre Island when you’re in Texas. 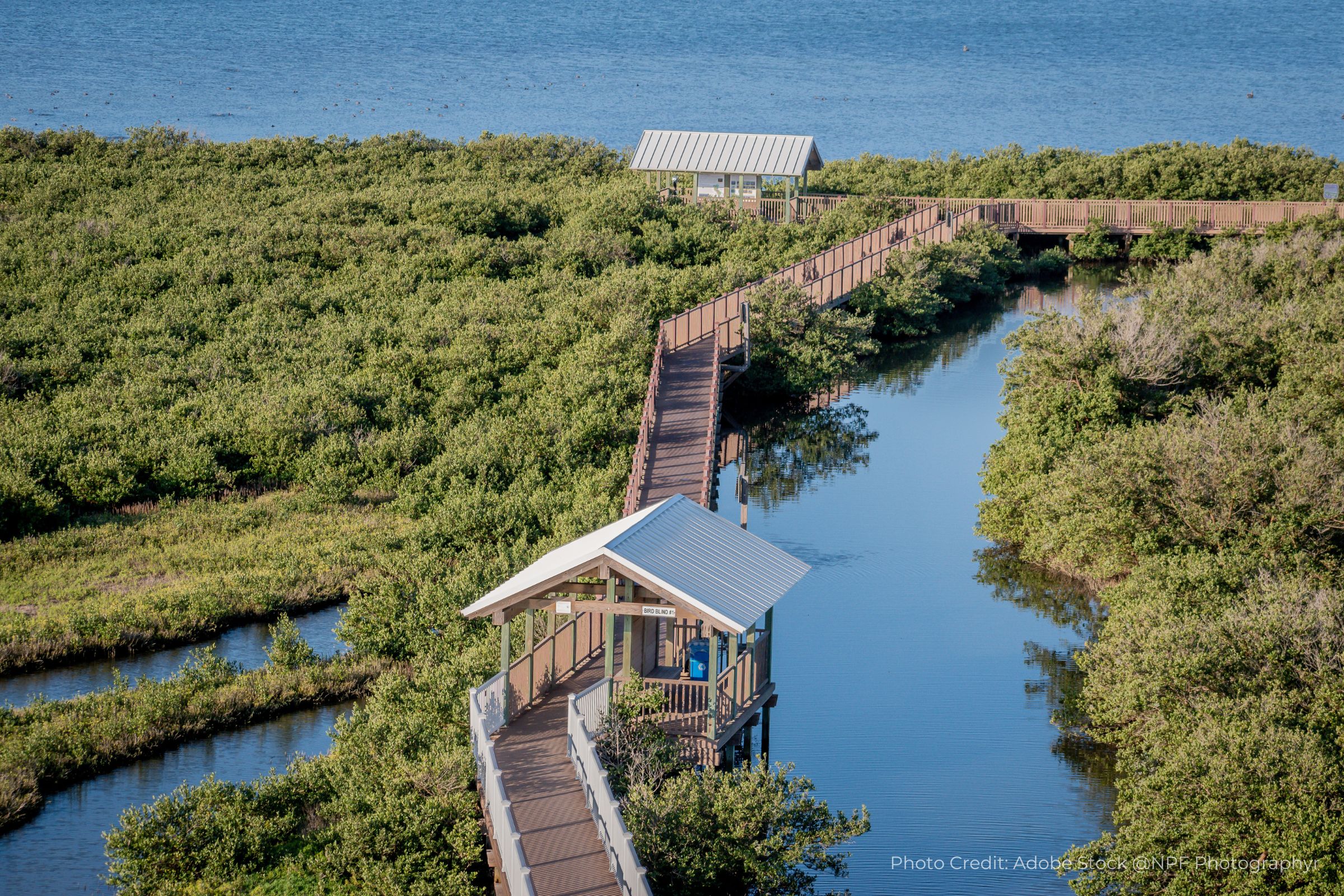 The tower near the South Padre Island Birding, Nature Center and Alligator Sanctuary has impressive views, and the boardwalk transports you over marshland, where you will see birds and other marine life. The walk can get hot in the summer, but there are shaded areas to keep you cool. Plan to be there at sunset. You won’t be disappointed. When you want to know “what kind of bird is that?” sign up for a Guided Birding Tour, where you will take a morning stroll on the boardwalk when you are most likely to see wildlife. The cost as of this writing is $5.25 per person, and binoculars are provided. In the winter, you will see the local and migratory birds who prefer the warm gulf waters to the northern cold. Don’t we all! 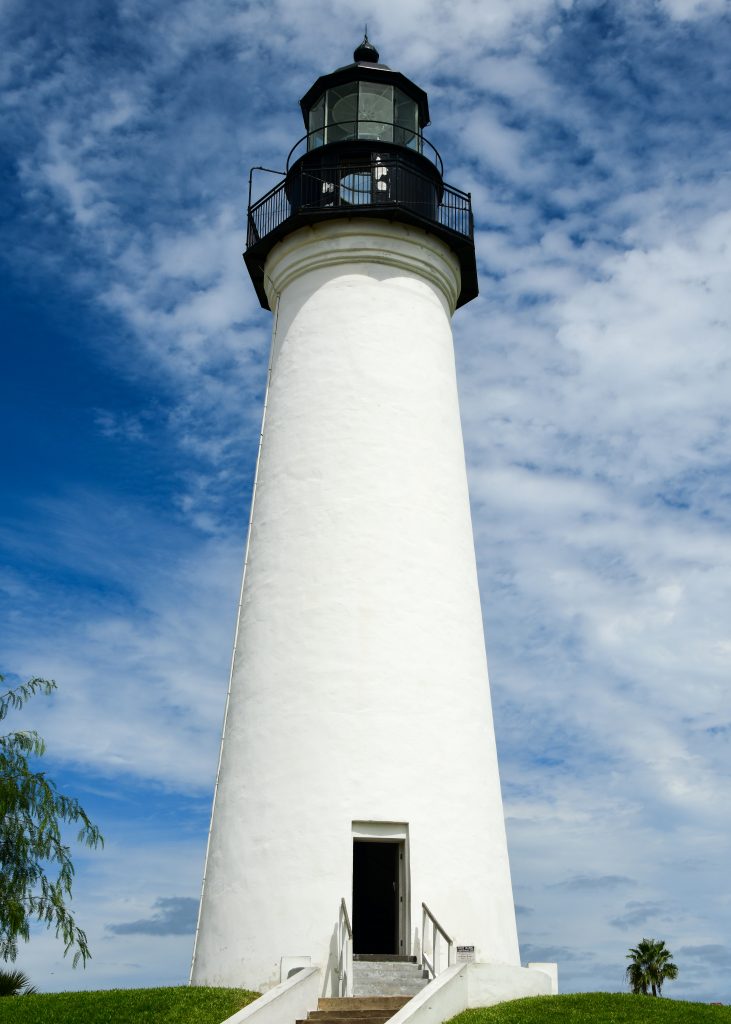 The 75 steps on the narrow spiral stairs inside end with two straight-up ladders that lead out to the catwalk, but the view from the top is worth the effort! There’s another set of stairs going even higher, but there is no access outside. The rocket launching site, Port Isabel, and the island can be seen. The Lighthouse Park is a grassy area around the base of the lighthouse and has a cool gnarled tree and space to run around.

The lighthouse is located inside the Brazos Santiago waterway and was built in 1852 on an old Army camp, Fort Polk, which General Zachary Taylor abandoned after the Mexican War. Interestingly, they set up that Army camp on private land (oops), so when they built the lighthouse, they didn’t know that. Once the landowners returned home, so to speak, to find a lighthouse in their backyard, the courts were left to settle the question of title. This was in 1887. They eventually settled on a price and sold the land to the government.

The lighthouse is open to the public, but if the weather is bad outside, it may close because it can get windy at the top. When it’s hot outside, it will feel hot inside, so be prepared for that. The entry fee is $5 for adults, $4 for seniors 55+, $3 for children 5-12 yrs old, and the military is free. The minimum age for children is 5. 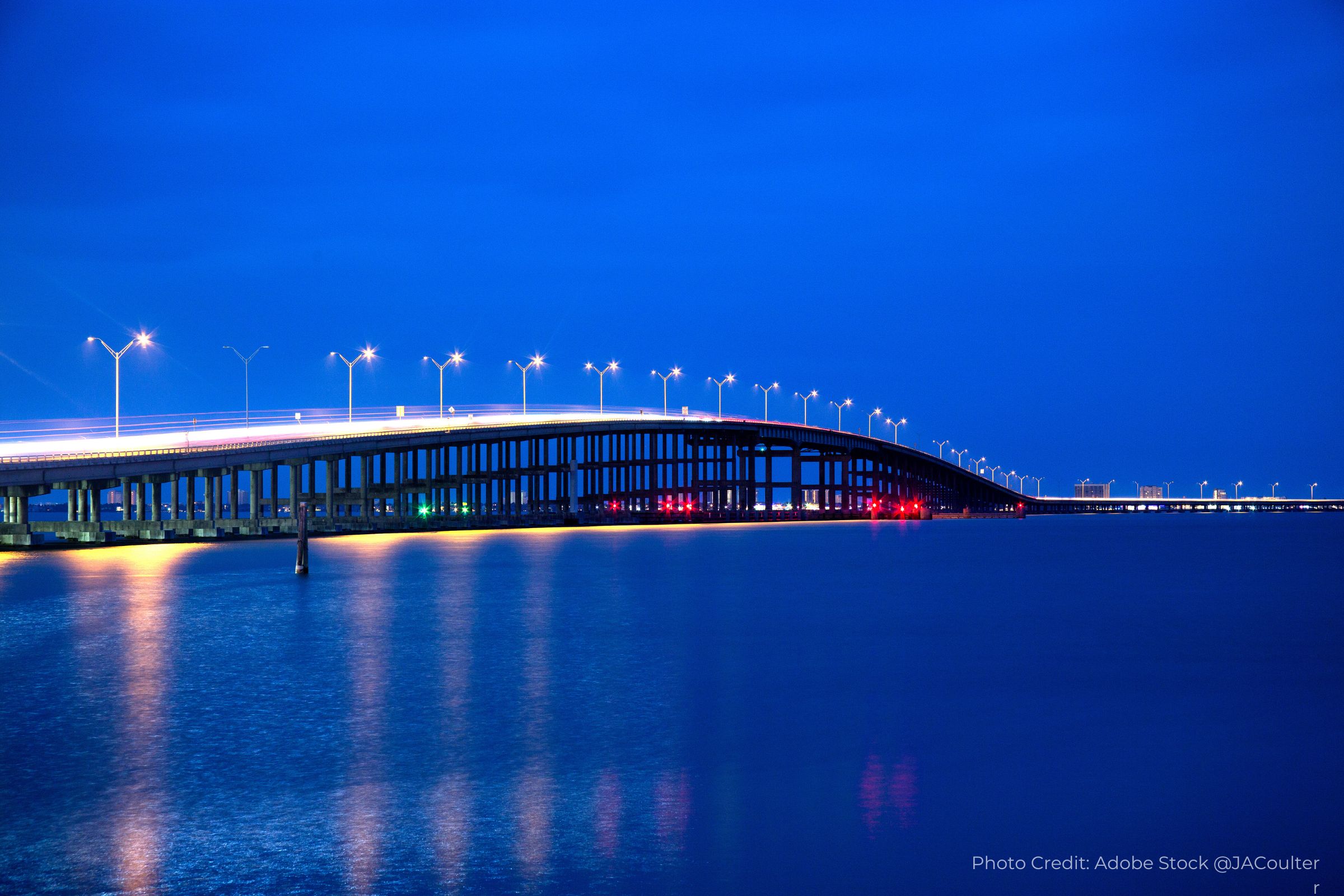 Once a year, runners and walkers can participate in a 5K and 10K event over the bridge

It was the 1930’s and the Great Depression gripped the country, but in the state of Texas, they were wondering how to build a bridge across the Laguna Madre to connect the mainland to Point Isabel and Padre Island. But that’s not all, as they say in the infomercials, this imagined causeway would lead to a 150-room hotel built on the beach to open up a tropical destination for tourists that was sure to rival the already famous Miami Beach in Florida. That was the dream. While the dream was delayed, it never died. In March 1950, voters approved the funding to build the bridge, and the official dedication was almost 25 years later. Today, you can drive the 15,252 feet of road across the bay. Some say you can get seasick on the roadway because you are surrounded by water. Watch for the annual Causeway Run in April! 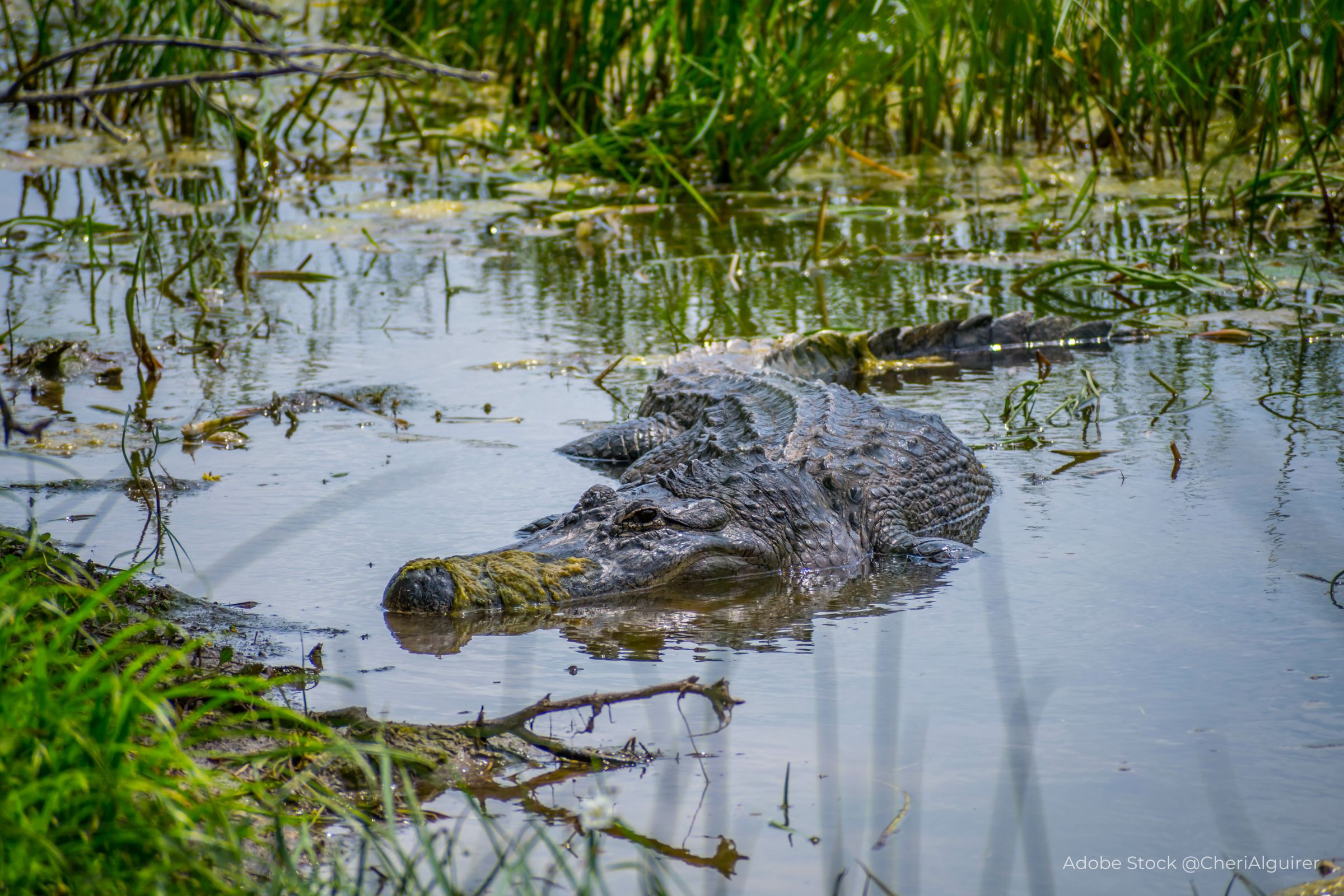 Choose your adventure, from a short walk around the visitor center to a longer trek…either way, it’s certain to be wild and beautiful

Drive 23 miles from South Padre Island to bike (or E-bike) or hike one of the multi-use trails at the Refuge. Hikers can take their pick from over 2,100 miles of trails and boardwalks at the Laguna Atascosa National Wildlife Refuge that range from short and sweet to longer and more challenging. Watch for wildlife along the trail; if lucky, you’ll see deer, pigs, big bucks, birds, and alligators in certain areas. Stop by the visitor center to find out which trail is best for you. If you only have a short time, check out the bird blind by the visitor center and walk the paved 0.9-mile trail. Got half a day? Ride the 14.2-mile Steve Thompson Wildlife Drive, the most beautiful loop at the Refuge. Somewhere in the middle? You have plenty of trails to choose from, including the Gator pond trail with an observation deck. The entrance fee is $3/vehicle, and there are a few fee-free days during the year.

Stretch Out or Pitch a Tent at Padre Island National Seashore 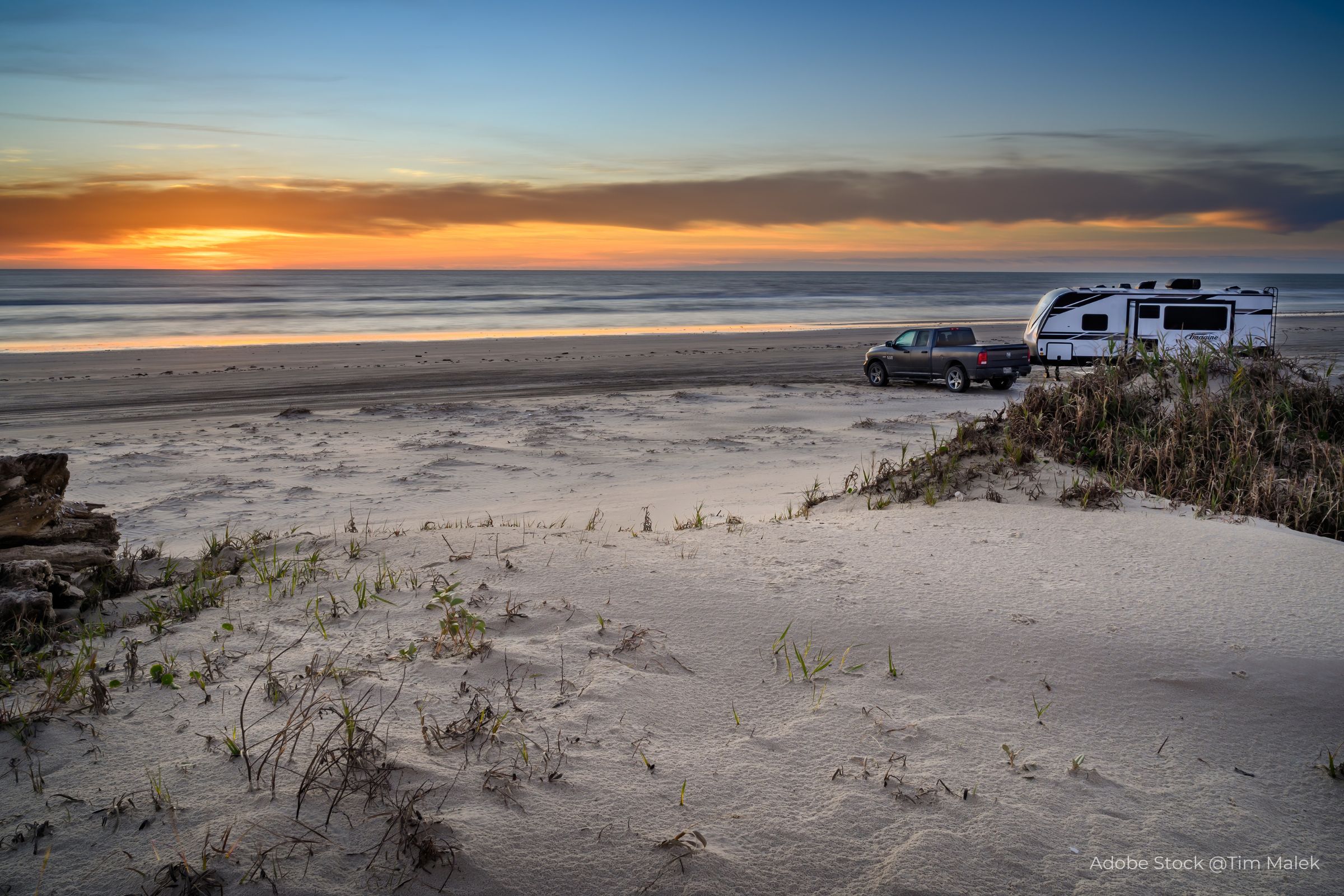 Beach camping is available on Padre Island on a first come-first serve basis. Be sure your vehicle is ready for the terrain as some spots are 4-wheel-drive only.

Playing on the longest stretch of undeveloped barrier islands in the world that separates Laguna Madre from the Gulf of Mexico will look different for everyone. You can discover five turtle species in the Gulf of Mexico, including Kemp’s ridley sea turtles, green sea turtles, loggerhead sea turtles, leatherback sea turtles, and hawksbill sea turtles. If turtles are your thing, and even if they’re not…yet, visit the place that “The Turtle Lady of South Padre Island” built. Sea Turtle, Inc was founded in 1977, and they work on conservation, adoptions, releases, and educating the public.

Love to camp and want to stay for more than a day? Then you can do that here: dry camping, beach camping, or at a nearby park with hookups.

Park entrance fees range from $5 for pedestrians or bicyclists to $10/day for private vehicles. Fees to the park vary, and if you have an America the Beautiful Annual Pass, an interagency pass for the best national parks in the USA, you get in for free. If you live in the area, the annual pass for Padre Island is $45. You’ll pay a little extra for boat ramp fees. Camping with no hookups (dry camping) is available south of the park entrance station on a first come-first served basis at Malaquite Campground and Bird Island Basin Campground. Bird Island is known for windsurfing and has a boat ramp area. Primitive camping is open to RV, tent, and beach camping and is available at South Beach, North Beach, and Yarborough (4WD only). Some areas require 4WD access, so know before you go!

Other campgrounds in the areas include Cameron County Parks

Those are just five things to do at Padre Island National Seashore and the surrounding area of the Texas Gulf Coast to add to your bucket list. It’s just the beginning because once you experience this special place, you’ll want to return season after season. Then, when you realize that the United States is filled with national parks, national marine sanctuary properties to experience, and public lands in some of the most fascinating places in the world, you’ll make it a point to explore our beautiful backyard! Ready to start planning? Get your National Parks and Public Lands Bucket List Checklist Here!

So, tell us…where will you go next? We would love to hear about your experience at South Padre Island! Be sure to sign up for our newsletter below where we occasionally send out travel ideas and inspiration. Then…follow us @vitabellamag on Instagram and other social platforms. We post often about what we are discovering to inspire your next trip. AND…we love to hear from you too! See you there! 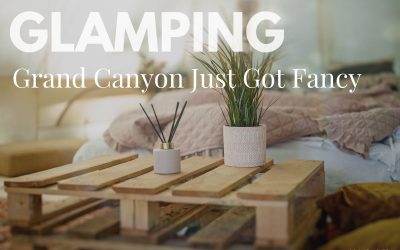 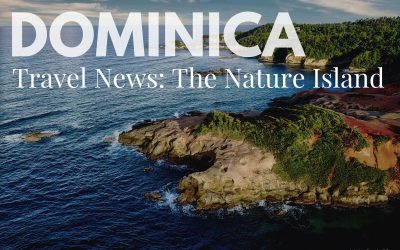 Travel to Dominica: Easy Escapes to The Nature Island

Travel to Dominica is getting easier. Should you plan your Caribbean getaway to The Nature Island before the secret gets out? Find out more… 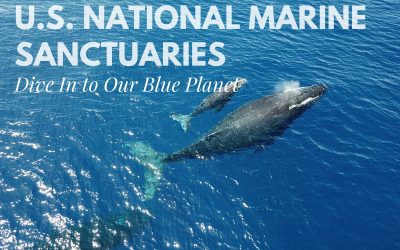 How blue is the planet? Visit a National Marine Sanctuary near you-explore rich life beneath the surface and appreciate our nat’l treasure. Find them here.

Like our style? We send newsletters out about once a month with the goal of inspiring you to Eat Well. Be Happy, and Travel More! Join us! We would love to include you in the journey to a Beautiful Life! 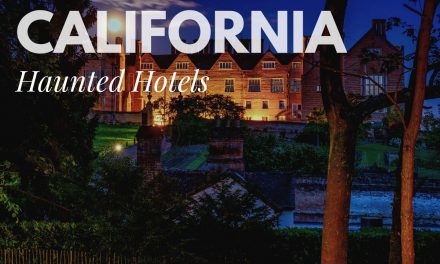 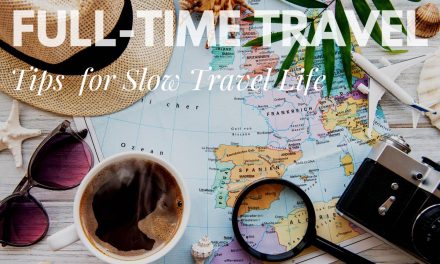 Full time travel: Is Slow Travel Right for You? 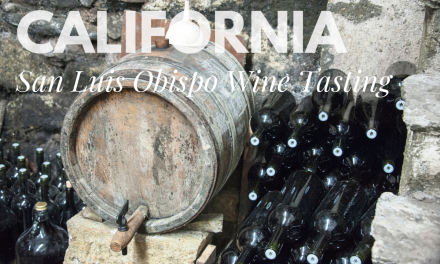 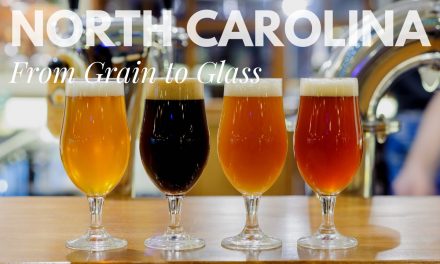